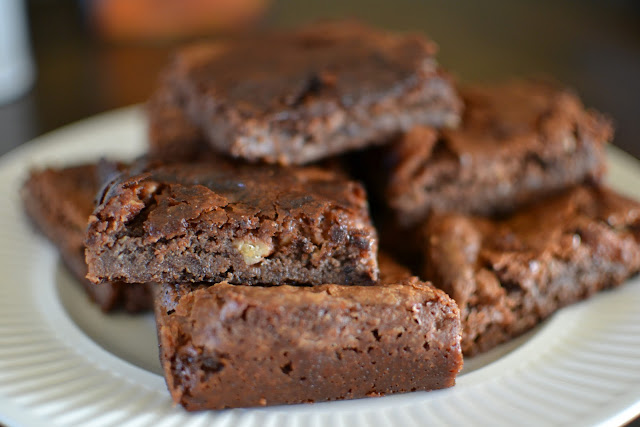 Caramel Pecan Brownies
This last weekend I had a chocolate craving. But I never keep the kind of trashy chocolate that I desperately felt like. The only chocolate I had in the house was of the dark, 70% kind. So I clearly needed to convert that into something sweet, chocolatey and tasty. I’ve had the Fat Witch Bakery Cookbook since last year but I haven’t really made anything substantial out of it. But I page through it at least once a week. Everything in it can be made in a rectangular baking tray which is sort of cool. So I tried out the caramel witches – brownies with caramel squares in them. They proved to be amazing. Just the right sweet kick that you need at 4pm. Some of the caramel leaked out to the edges and became chewy which totally complemented the smooth, squishy chocolate brownie. These are immensely dense brownies, and not the cakey kind that you sometimes get. The Fat Witch Bakery is n New York so the recipes are in American measurements – things like sticks of butter which need to be converted. There is a conversion chart at the back of the book that is helpful. The recipe calls for 30 caramel squares which I did not have so I used some ready-made caramel sauce instead which worked fabulously.
Caramel Pecan Brownies
Adapted from the Fat Witch Bakery Cookbook
200g unsalted butter
½ cup plus 1 tablespoon dark chocolate chips (the better the quality the nicer tasting the brownies)
3 eggs
1 cup plus 1 tablespoon caster sugar
1 teaspoon vanilla
½ cup roughly chopped pecans
½ cup plain flour
Pinch of salt
3 tablespoons caramel sauce
Preheat the oven to 180C. Grease a square baking tin and line with baking paper.
Melt the chocolate and butter over a low heat, stirring often so that the chocolate doesn’t burn. Set aside to cool.
Beat the eggs, sugar and vanilla until smooth and well mixed. Stir in the cooled chocolate mixture and then the pecans.
Fold in the flour and salt and mix until well combined and no flour traces remain.
Pour half of the batter into the tin.
Drizzle the caramel sauce over the batter and put into the fridge for 20 minutes to firm.
Remove from the fridge, pour the rest of the batter on top and allow it to reach to room temperature – about 15 minutes.
Bake for 25-35 minutes until the brownies pull away from the sides and are cooked through.
Cool in the tin before slicing and serving with coffee.