I first learnt about Thomas Keller and The French Laundry back in 2005. I was at chef’s school and we were all completely obsessed with other chefs, particularly other chefs who were breaking all the boundaries of the French cooking methods we were learning. We spent hours of our days gawking over people like Charlie Trotter (food porn), Thomas Keller (like seriously?) and John Campbell (the pictures are just so beautiful, the taste combination’s somehow mind blowing). Sometimes others even attempted some of their things. I was way too shy. I bought The French Laundry Cookbook (TFLC) that year and spent a significant amount of time staring at the pages, mind completely blown away. I’ve never tried any of his recipes with the exception of brioche. For me, cooking is generally about need or pleasure and to be honest, Keller is about work. Lots of it. And forward planning. I’m not so good at those things so this remains one of the most underused books on my shelf, which I guess is a little bit of a tragedy. I’ve been tempted to buy both Bouchon and Ad Hoc at Home but haven’t yet. Maybe one day when I have my food library.

Anyway, so the recipe I chose to try from TFLC was the brioche. Brioche is something I’ve made before, a fair few times and I wanted to see if Keller’s recipe was genuinely superior to others. I also figured brioche is something fairly hard to mess up. This recipe makes truly spectacular brioche. And it takes time! I make brioche for various things, to eat with pâtes, to make into French toast, to eat instead of bread and one year, mimicking Heston’s Christmas feast, I made brioche with mince meat swirled through it that we had as French toast on Christmas morning. (It was really good!) Anyway, Keller’s recipe uses lots of eggs and a seriously large amount of butter. This is not brioche for the faint – hearted or calorie counters. Its also super fantastic lightly toasted with butter and marmalade which is how I had it for breakfast this morning. And yes, I did question the need for more butter but you know? go big or go home.

Put the yeast into a bowl and add in the warm water. Allow to activate for 10 minutes.
In a standing mixer bowl place the flours, sugar and salt. Using the dough hook, mix this for half a minute or so then add in the eggs. Mix for 5 minutes on a low speed. The dough will slowly come together.

Pull all the dough off the hook and add in the butter in 4 parts, mixing on a low speed in-between additions. It will look like there is too much butter for the amount of dough but just keep adding. Once all the butter is in, mix on a low-medium speed for 15 minutes. A magical transformation will take place. The dough, which was looking slightly overwhelmed for butter, will overcome this and the result will be a glossy, shiny dough that is super smooth and very sticky. 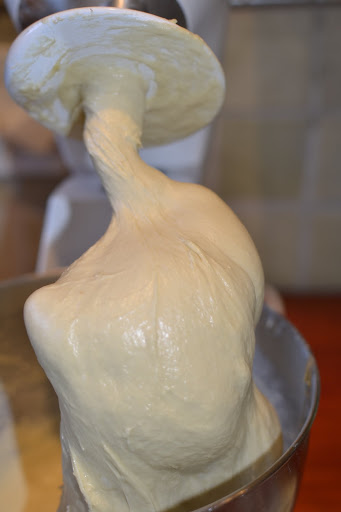 Turn (pour) the dough into a new clean bowl and wrap in clingfilm. Now leave it to prove in a warm place for THREE, yes THREE, hours. (Go and do something constructive now please.)

Once the three hours are up, gently turn the dough out onto a well floured surface. They’re not kidding about the well floured bit – the dough is really sticky and you’ll struggle if you don’t use flour. Knead it a little, (Keller says gently) knocking out all the air and then form it back into a ball. Put this back into a bowl, cover and refrigerate overnight. (I told you this takes a long time.)
The next morning, take the dough out of the fridge. Grease 2 loaf tins. It will be very stiff and difficult to work with at first (though not as sticky as the day before) so I recommend using a rolling pin to roll out the dough. Divide the dough into 2 parts and form into loaves. Place these in the loaf tins and leave, uncovered, until the dough is risen to about 2cm above the tin.

This is estimated to take another THREE hours and maybe it does in Keller’s hot kitchen. In my cold house today, where the temperature outside was a decidedly unfriendly 11C, this took way way longer. At one point I had the loaves in front of the heater and still they did nothing. Eventually, after 6 hours, I gave up and chucked them in the oven. (Which you will obviously preheat to 180C.) As you can see, the bread is very under proved-that’s why its cracked open. Patience is clearly something I must learn if I’m ever to become truly skilled. Still, the brioche tastes good and is going to become French toast on Saturday  so I can’t say its causing me restless nights. But for those of you who worry about this stuff, wait until the brioche is 2cm above the tins – it should be poofy and incredibly light. The loaves are done when golden brown and when turned over sound hollow. (This means you need to tap the underside of the loaf…) 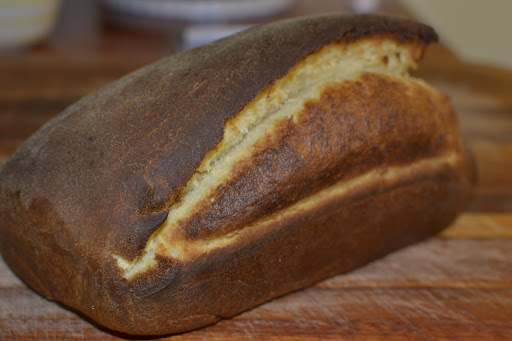 *Keller uses all-purpose flour, something we don’t have so I used stone ground cake flour instead. This has more body than regular cake flour and tends to take more liquids.