Moving cities and making new friends is a difficult process. It’s especially difficult if you are chronically shy and incapable of making small talk. Beyond the hi, what do you do sort of conversation I am lost. I am uneasy in crowds and avoid networking type things at all costs because I am totally useless at networking. However, being able to bake is clearly something that is helpful when meeting new people. Who cannot be turned by the waft of a chocolate brownie or the smooth, satin filling in a lemon slice? For most people, food is important (at least it is for the people I know which means either I am only friends with foodie type people which, I guess, is possible or most people are willing and eager to seek out good food…) and food thus becomes an easy stepping off point of departure in a friendship. Many a friendship has been cemented over a good dinner or a slice of cake or a glass of wine. (Never forget the importance of alcohol in making friends.)

So new friends of mine offered to make dinner on Saturday (which I obviously accepted) and I was asked to bring dessert. Much thinking went into the decision of what to take. Brownies? Lemon tart? Cheesecake? In the end the cheesecake won if only because this is possibly the world’s best cheesecake (slightly edging out Bill Granger’s White Chocolate Cheesecake which we’ll talk about another time) and it’s super easy to make without an electric beater/standing mixer. (How I do miss my standing mixer…)

This recipe was given to me by one of my mentors who taught me (almost) everything I know about pastry, cake and the like. I’ve served it to various people and used to make it often but hadn’t thought of it in a while until a friend requested a cheesecake recipe over Christmas. It’s a super smooth cheesecake that has that cloying mouth feel of clotted cream. Everything about it is decadent and yet, surprisingly, it’s not overwhelming. It’s the type of cheesecake which allows another slice without making you feel like you need to undo the top button of your jeans. It’s the cheesecake to take when you’re trying to win over your mother-in-law.

Eat it plain (we did) or with berry compote. Flavour it any way you wish. I’m partial to vanilla myself but lemon works well as would lime, orange (you could use chocolate biscuits as the base then) or possibly rosewater, although I’m not 100% convinced of that… I made half the amount here, in a 20cm tin. My only gripe was that it wasn’t as high as I would have liked. If you make the full amount (that listed below) bake it in a 24cm tin.

Preheat the oven to 160C. Line the outside of the tin with a layer of baking paper and then a layer of foil. This will protect any mixture from dripping into the bottom of the oven. (The easiest is to place the foil under the baking paper under the tin. Fold the foil and paper simultaneously around the edge of the tin.)
Place the biscuits into a plastic bag and bash with a rolling pin until finely crumbed. This works well as a stress reliever. Alternatively blitz them in a food processor. Melt the butter and add to the biscuits (now in a bowl) stirring until all incorporated. Press this into the base of the tin using the back of a spoon to smooth it out. Refrigerate until needed.
Place the sugar, cornflour and cream cheese in a bowl and using a spatula incorporate until smooth. Alternatively using a beater, beat until smooth. It’s very important that the mixture be smooth at this stage because you won’t be able to do anything about lumps later on. Take time here. It’s worth it. 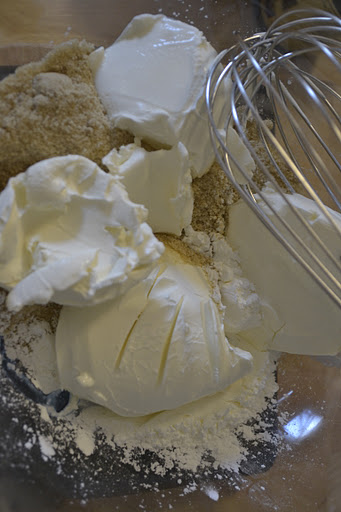 Add in the cream, vanilla and yolks and whisk together.
Pour this mixture onto the biscuit base and bake until just set in the middle and slightly raised on the sides. It’ll take between 40 minutes and an hour or so. It should still wobble slightly in the middle when you take it out.
Allow to cool to room temperature before refrigerating. Then eat at will. Preferably with friends.