Last week I went a bit of a shopping spree at my local fishmonger which doubles as my vegetable store. Outside they had peaches, nectarines, cherries, raspberries, strawberries, blueberries and blackberries all at their prime. I went a little crazy and whilst I’ve managed to make my way through much of the produce that I bought, some of it has started to look a little worn around the edges. I can only eat so much fruit which is why I was making triple berry cake on Sunday. 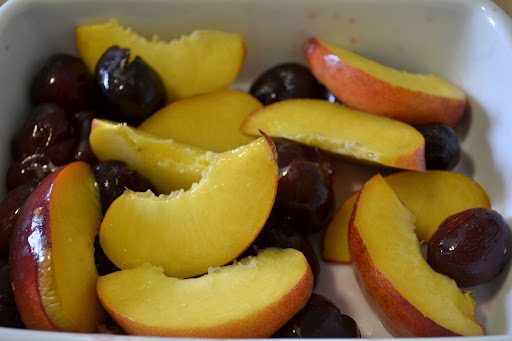 Today I had more success. I had a bowl full of cherries and one lone nectarine and a book I’ve been wanting to try something from for ages and ages. The book is Food from Plenty by Diana Henry. She is one of my favourite food writers and I found this copy in a second hand bookshop in Cambridge and despite it’s weight, had to buy it instantly. (I then had to lug it back to Nottingham which was less fun.) 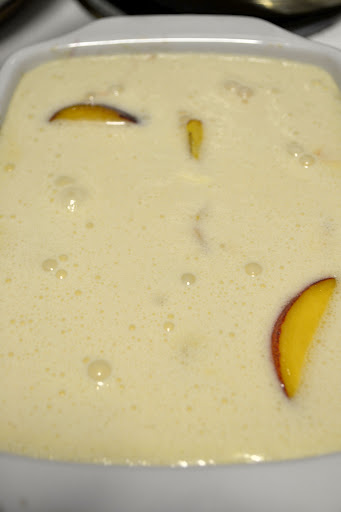 I’ve never been a huge fan of clafoutis, mostly because for much of my life I haven’t been a big fan of cherries and the two seem to go hand in hand. I suspect my aversion to cherries is related to the canned, extremely sour variety that were a feature in my childhood. (Growing up in South Africa in the 1980’s is a food experience I wish on no one.) But fresh cherries are a revelation – sharp, sweet, juicy – and even though I didn’t quite get through the ones I bought a clafoutis is a rather good place for them. I’m not a big mixer of fruit – I dislike fruit salad with a vengeance – so I carefully ate my way through cherry mouthfuls and then nectarine mouthfuls. It was beautiful, almost two different desserts. The clafoutis was light as air, the fruit just soft, bursting with flavour and sticky juice. This is a dessert for sharing although you can keep it all to yourself…

Preheat the oven to 180C. Scatter the fruit into a small baking dish. Squeeze the lemon juice over together with the 2 tablespoons of golden caster sugar. Place in the oven and bake for about 10 minutes until the fruit is soft but not falling apart.
In a bowl whisk the eggs with the caster sugar and honey until thick and pale. Fold in the flour and salt followed by the creams. Pour this over the baked fruit and return to the oven. Bake for 15-20 minutes until risen and puffy. The clafoutis will collapse slightly on cooling. Serve warm with more cream.