I saw this post on Smitten Kitchen yesterday and I knew I was going to have to make scones this morning. Only I couldn’t decide about the flavour. I’ve always been a bit of a scone purist – plain and layered butter, raspberry jam and clotted cream but those scones just looked so amazing I knew I was going to have to give them a try. An audition, if you will, to convince me that scones could be more complex than I would normally allow. I was tempted to do the roasted pear one Smitten Kitchen made but then I was paging through Annie Bell’s Baking Bible and came across a recipe for large, fruity scones with currants and orange and an idea occurred to me. What about cranberry, orange and dark chocolate? It is, I admit, a very Christmas combination but what with every single store I go in to bombarding me with Christmas related information, you can hardly blame me. Well, I guess you could – for giving in two months ahead of schedule. Next I’ll start eating Easter eggs and hot cross buns at my birthday. I can forgive these scones for my failure to resist Christmas until December. They’re amazing, if I do say so myself.

They also happen to be the perfect Sunday morning breakfast, eaten straight out of the oven with a lot of butter and accompanied by a mug of steaming coffee. I wrote earlier in the week about how my project has been changing and developing. I finally saw my supervisor on Friday and spent a good hour and a half finally explaining all the worries/ideas/walls/crises I’d been having over the last few weeks. There is nothing like a good outpouring of fear and worry and Friday was kind of cathartic and healing on a level. On another level it resulted in a lot more work for me – I’m going to have to redesign my entire project. I have to keep it related to what I’ve already done but I’ve had to think seriously about how to take it forward. And it all has to be mainly sorted out before I return to schools on Thursday so I can tell them about my change of plan.

PANIC. In a epic, end of the world kind of way. I mean seriously. So much for the healing process on Friday, but this morning I was back to full panic mode. This whole getting a PhD in three years is not something to kid around with. There are deadlines and cut off points and making-sure-you-have-data-that-can-be-analysed-and-made-into-a-readable-document-before-those-end-points. Never mind the bill-paying/life-living things that go on around this. Which brings me to the scones. There is something very calming about making scones, particularly on a Sunday morning in late October when it is grey and freezing and the fog is lying low and the only acceptable thing to do is be in a warm kitchen with the lights on, coffee at hand and flour in a bowl. Annie makes her scones in a food processor but as someone who has never owned a food processor (technical things have a tendency to break on me) I make them the way my mother taught me – with cold butter and cold hands, slowing rubbing the butter into the flour until it resembles breadcrumbs. Then adding in the egg and buttermilk and bringing everything together into a slightly sticky dough whilst not really working it too much. For whatever reason I find such work therapeutic – it calms my mind having to concentrate on the dough, not over-kneading it, making sure it’s not too wet. Other concerns are driven out by the patting of the dough, gently pushing in the crumbly edges. The slicing and placing on a  baking sheet. The panic and fear which runs at an undercurrent in my veins is subdued by this act of baking and then eating. Only once I am done do I start to contemplate writing the redesign, which is my task for the day. At time of posting I have successfully written out the redesign (and mapped it on a pretty mind map). Now I just need to contact schools, write up interview schedules, read. You know, the usual PhD stuff. Oh and get my head wrapped around the new design so things in the next seven weeks go slightly more smoothly.

Some more notes on my changes to the recipe. I halved the one in the book as I was only cooking for me and, as scones are best eaten straight from the oven, I didn’t want to be snowed under by them. As a result, I tended to use slightly more ingredient than the exact half – for ease of measurement mainly. I used cranberries instead of currants and added in an extra 50g of dark chocolate. I used buttermilk rather than milk and measured it to 1/4 cup, rather than simply adding in. As I said above, I made them by hand, rather than in a food processor.

In a bowl weigh out the dry ingredients. Add the cold butter to this (I cut it into small cubes) and rub the butter into the flour until the mixture is flaky and resembles breadcrumbs. 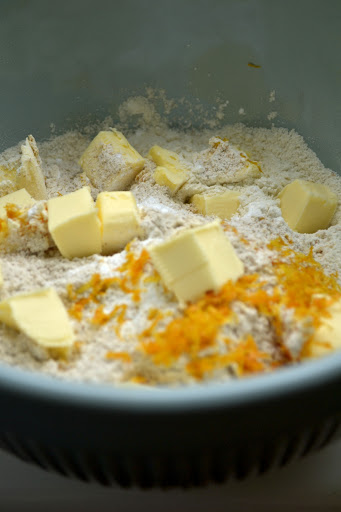 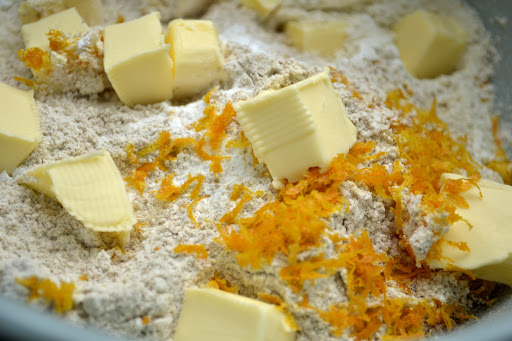 Add in the egg and then the cranberries and dark chocolate, finely chopped. Finally add in the buttermilk and mix until it forms a dough. 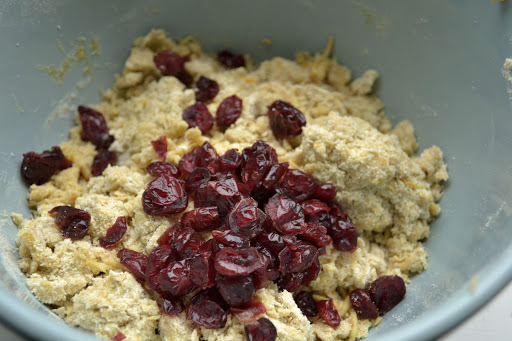 Place the dough onto a parchment sheet and press down into a circle, not too thin. Cut into wedges.

Place the wedges on a baking tray lined with baking paper. (I lifted, very carefully, the sheet the scones were already on and placed it onto my baking tray.) Allow to rest for 20 minutes. Preheat the oven to 200C.
Glaze the scones with half an egg mixed with a little milk. Sprinkle some sugar on top and place the scones in the oven. 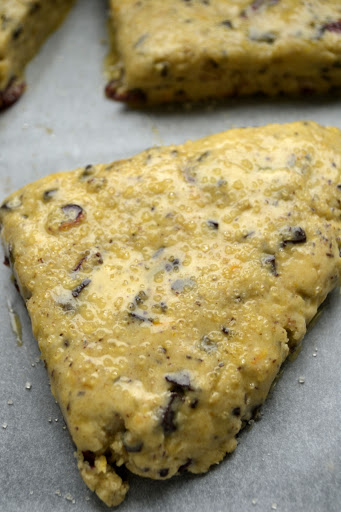 Bake for about 18 minutes, until golden. Eat warm. 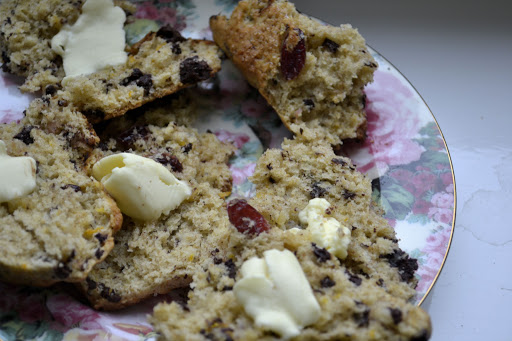