So here’s something you should know about bread. You cannot be distracted when you make it. You cannot start to make bread and then take a nap, for example. Nor should you be corrupted by friends for a glass of wine (which turns into two bottles). It will mess with your bread. There. I’ve said it. You can’t say I didn’t tell you. 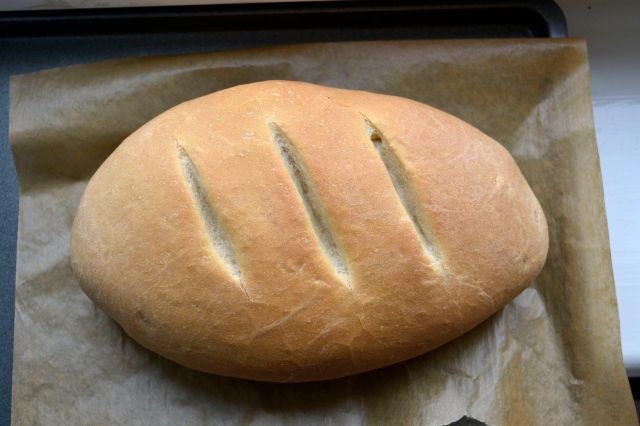 I started a starter (I love that), on Thursday evening because the instructions said it needed 24 hours before you could turn it into bread. Great, I thought. I can make bread on Friday afternoon. All will be well. That was before the nap and the wine.

It turns out, and I’d been told this before but sort of regarded it as pastry/baker folklore, that you can over-proof bread. I’ve never done it, even though I’ve left breads to proof for hours at a time but on Friday evening I obviously pushed this luck a bit far. I turned the starter into a bread and proofed it in the oven (off, obviously). Then I knocked it back and shaped it and left it to proof whilst I had a nap. First mistake. When I got up, just in time to go to dinner, the loaf was ready to go in the oven and I thought, it’ll survive half an hour whilst I eat. So I went to dinner. Then friends invited me to join them for drinks. Just one drink I thought. Three hours later I returned home to a loaf that had proofed up and then started to sink back into itself. A sure sign of over proofing. Whoops. I baked it anyway. I wasn’t about to throw out all that flour and I guess a small part of me thought I could still get away with the bread neglect. I was wrong. The bread was super crunchy and tasted stale. So I admitted my mistake and started again, with another starter.

Seeing how much bread the recipe made, I halved it and made the loaf yesterday morning. It turned out wonderfully. It’s not life-changing bread but good, solid, white loaf, that works excellently with marmalade at breakfast time. I spent most of yesterday afternoon slicing it and eating it with vast quantities of butter and marmite. You’re supposed to cook it on a stone, to get a good crust and baker-oven effect but I don’t have one so mine only had a good crust for the first hour. I don’t really mind though.

To make the starter, combine the yeast and water in a large bowl and stir. Leave, uncovered, for 15 minutes, until the yeast is foamy. Stir in the flour and combine until the mixture is smooth. Sprinkle over some extra bread flour and cover with a tea towel. Leave, undisturbed, for 24 hours.

To make the bread, stir the warm water into the starter and add in the salt. Add in the flour in four goes, starting out with a wooden spoon to combine but then kneading with your hands. Both times I made this I had to add in a little extra water (about two tablespoons) to get the last of the flour to combine with the dough. Don’t be afraid to add extra water if your dough is dry.

Knead the dough lightly for about five minutes, then place in a clean, oiled, bowl, turning the dough around in the bowl so it is covered in olive oil. Cover with clingfilm and place in a warm, dry place until doubled in size (about 45 minutes).

Knock back the dough and shape it into a loaf.

I suspect you can bake this in a loaf tin if you desire although this will make it look less rustic. Place the shaped loaf on a lined baking tray and proof again for 45 minutes, until doubled in size. Preheat the oven to 220C. Slash the dough lightly with a bread knife.

Bake for about 30 minutes, until the loaf is golden and sounds hollow when tapped.

Allow to cool before eating.