So a while back the Princess and I went day tripping to Lincoln. It was a bright sunny day quite early on this summer (which has been bright and sunny a lot, much to my delight) and whilst we were there we stumbled across the quaintest kitchen shop where I found a bundt tin (again much to my delight). The Princess made fun of me for buying kitchen equipment on a historical day out but whatever. I needed a bundt tin and they’re just far to heavy to cart overseas. (Although I will confess to doing just that when we were in New York together and I had a moment in Zabar’s and bought two. I then had to persuade my Dad to put one in his luggage because each tin must weigh at least three kilos. Sadly neither of those tins made it into my PhD suitcase hence the need for a new one.) Anyway, as well as finally buying a bundt tin I noticed that I recently passed my 200th post and decided cake would obviously be the way to celebrate. That and the fact that I promised an American friend cake for moving our stuff out of the way of the rising tide on the beach in Wales on Sunday. (Yes! I went to the beach! In Wales! And I got into the Irish Sea! Which, I might add, is freezing.)

So this bundt is adapted from a recipe in the Donna Hay magazine which arrived last week. It’s the black and white issue and is lovely. Is that magazine ever not lovely? The cake is dark and moist (sorry but it is), and the glaze is slightly bitter. It’s an almost-one-bowl cake, which suits me just fine as it means less washing up. We ate it warm after dinner – such is my scheduling that I was late to dinner because I was waiting for the cake to bake. I’m told this is an acceptable excuse.

I used gluten-free self-raising flour because that was the self-raising flour I had. As such, I added in xanthan gum for texture. I also didn’t have liquid glucose which is called for in the glaze so I used golden syrup. I suspect this made the glaze thicker than it was meant to be but I liked it so consider it a winning substitute.

Preheat the oven to 170C. Grease a bundt tin with butter.

Mix together the milk, sugars and vanilla in a large bowl.

Melt the butter and chocolate over a low heat, stirring almost constantly once things start to melt so that the chocolate doesn’t seize.

Pour the chocolate mixture into the milk one and whisk until smooth. Then whisk in the eggs. Sift in the flour, xanthan gum and cocoa powder. (This is one of the few times I actually bother with sifting, mostly because cocoa powder has a tendency to clump when added into large liquid batters and then you spend a ridiculous amount of time chasing the lumps around the bowl. Who needs that?)

Pour the batter into the bundt tin and bake for about an hour. Allow to cool for 10 minutes in the tin before turning out and cooling before glazing.

Make the glaze whilst the cake is cooking – melt the butter, chocolate and syrup together in a saucepan, stirring until smooth. Off the heat add in the sunflower oil. Spoon over the cooled cake and allow to set before slicing. 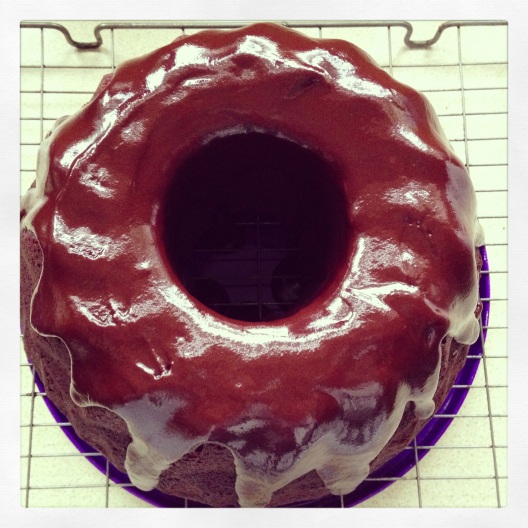