I started listening to podcasts recently. I’ll be honest, up until now, I’ve never really understood talk radio. When I listen to the radio, it’s because I want to hear music, not people chatting about some topic. I’ve always been a listening-to-music-commuter. But then my friend Jess introduced me to the Harry Potter audio books and I became hooked – both to hearing Stephen Fry read Harry and to audio books in general. I find it works best to listen to favourite books – like His Dark Materials or The Lord of the Rings – mostly because I’m easily distracted and sometimes switch off concentrating and then discover I’ve missed several minutes. This is not a problem when you know the story but it is easy to get lost in a new one when this happens. I even managed The Luminaries on audio although I had to restart it several times because I wasn’t concentrating enough at certain points to actually follow the story. But audio books are reasonably expensive and so now I am limited to one new book a month (which makes for about a week’s worth of commuting). So I’ve had to root around and think of other things I could possibly listen to and that’s how I discovered podcasts.

I started off with the BBC Food Programme and Monocle’s The Menu. But I exhausted those pretty quickly (listening to loads of older programmes at first and now waiting each week for new episodes) and I started to hear about this podcast called Serial. Finally, last week, I downloaded it and, in the space of 48 hours, listened to the entire season. I couldn’t stop listening. It was so good. Clever storytelling, gripping story, terrifying in places. And I couldn’t get it out of my head. I keep asking everyone I know if they’ve listened to it yet so I can have a conversation about it with someone.

Anyway, post-Serial, I started to expand my podcast repertoire.  I remembered one of the girls I met last year at the LongHouse Food Scholars programme, Fiona, had started one – it’s called Shut Yr Pie Hole. And it is fabulous – random eating/interviews/facts about food, based in Detroit. And then, in one of those kismet-y universe type-things, Lottie and Doof’s latest blog post was for this Grapefruit Black Pepper Meringue Pie from Sister Pie in Detroit. Sister Pie (aka Lisa) is the other half of the Shut Yr Pie Hole podcast. It was like the universe telling me to make pie. PIE PIE PIE.

I’m not sure about you, dear reader, but I did not grow up eating pie. In fact, I can think of only two pie-esque desserts in the South African repertoire that are related to the thing that is pie – melktert and lemon meringue pie. Now, whilst I am a big fan of melktert (I really should make some for this blog), I am not a fan of lemon meringue pie. At least, not the one I grew up being offered. (See here for a revelatory lemon meringue courtesy of Bouchon Bakery in New York). The problem, at least for me, is that, in my head, lemon meringue should be a very tart curd and a sweet meringue, the combination of which then works and is not overwhelmingly sugary. But South African lemon meringue is made with condensed milk which means that it is unnaturally sweet and sickly. Not my vibe at all. So I’ve never really understood citrus-meringue pies. (A plain, tart lemon tart, on the other hand (see what I did there?), is totally my vibe.)

Last year, at LongHouse, I learnt to make American pies – blueberry ones and cherry ones. I learnt about making pie dough (and lard), lining pie dishes (and how to crimp the edges just so), how to make the fillings (the importance of tasting them before you bake), and the various crust options for the top (lattice, crumble, whole). I haven’t made pie since then and so today felt like a good day to practice these skills. (And make dessert for later.) Plus there was the whole universe going ‘you should make pie’ and really, who I am to mess with the universe?

I made my own pie crust for this pie and, instead of grapefruit, used blood oranges, which, yes, I have been hoarding carefully, not wanting the season to end. I also halved the original recipe, not wanting to make an excessive amount of pie and, decreased the sugar and increased the lemon juice, slightly, to compensate for the sweeter oranges. I made an Italian meringue, so that you don’t have to worry about uncooked eggs, and browned it under the grill in my oven.

To make the pie crust, place the flour, salt and sugar into a mixing bowl. Cut the butter and lard into smallish cubes and rub into the dry ingredients until the mixture starts to resemble breadcrumbs. Add in the cold water, a little at a time – just enough to get the dough to come together.
Turn out onto a lightly floured surface and knead the dough until smooth – around five minutes. Shape into a ball, flatten and wrap in clingfilm. Refrigerate for an hour. While you wait, make the filling.

In a bowl, grate the orange zest into the sugar. Rub the zest into the sugar until, as Sister Pie says, it resembles wet beach sand. Whisk in the cornflour, honey and salt. Then whisk in the egg and yolk, followed by the rest of the ingredients. Taste the mixture – if it is too sweet, add in more lemon juice. If it is too sour, add in an extra tablespoon of caster sugar. Set the mixture aside.

Cut the pastry in half and roll out half into a thin disc. (Wrap the rest of the pastry in clingfilm and freeze for another day.) Make sure the surface you’re doing the rolling on is lightly floured. Turn the pastry between each roll so you maintain the semblance of a circle. Place the pastry over an 18cm tart tin or pie dish (the pie dish is preferable but I don’t have a small one). (I use a loose-bottomed one.) Gently press the pastry into the tart tin, pressing it into the inner edge of the tin. Trim the overhang so there is about 1/2cm above the edge of the tin. Crimp this using the thumb of your one hand and the thumb and forefinger of the other. Refrigerate the tart case for half an hour. Preheat the oven to 180C.

Pour the filling into the pastry case and bake for 30 minutes until the filling is set at the edges but still wobbles slightly in the centre (“wobble set”). Remove from the oven and set aside to cool. Make the meringue.

Place the sugar into a saucepan and add in the water. Cook over a medium heat until the sugar dissolves. Increase the heat and cook until the sugar reaches soft ball stage – 116C. (You can use a sugar thermometer or you can check by filling a glass with cold water and taking a teaspoon of the sugar syrup and placing it in the cold water. When it forms a soft ball, it is ready. This takes about 10-15 minutes.) Whilst the sugar is cooking, whisk the egg whites and salt to stiff, using a hand beater or in a standing mixer. Once the sugar is at temperature, carefully pour the sugar into the egg whites, whisking whilst you do so. The sugar will cook the egg whites and create a soft meringue. Fold in the black pepper. Spoon this onto the tart. Heat your grill. Place the tart under the grill until the meringue starts to brown – this takes only around 3-5 minutes so watch it carefully. 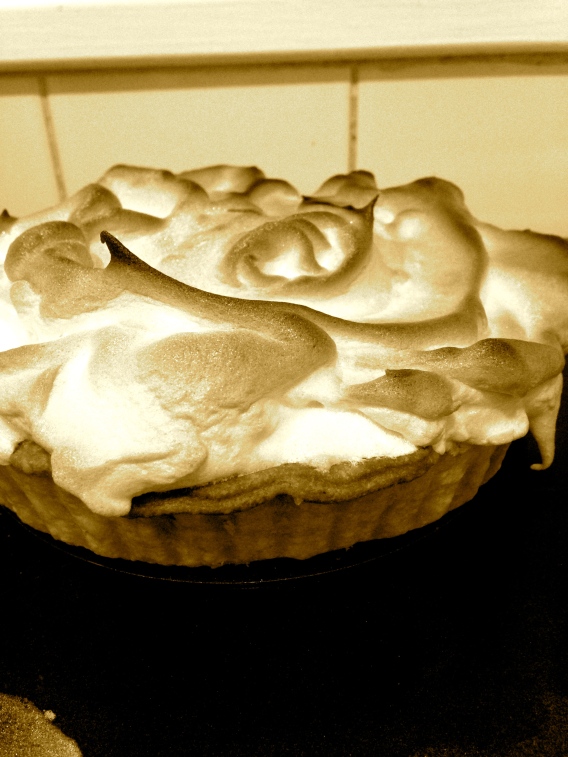