A while ago, David Lebovitz blogged about these brownies. Then I bought a book called The Secret Lives of Baked Goods, which is an excellent little tome, all about the history of American baked goods – like why Boston cream pie is called a pie when it is clearly a cake – and it included this recipe. Then I made brownies from Tea with Bea and I was so disappointed with them (far too much going on there for me – the Princess thinks they’re amazing) that I found myself longing for a simple brownie. One without bells and whistles on. This is that brownie. 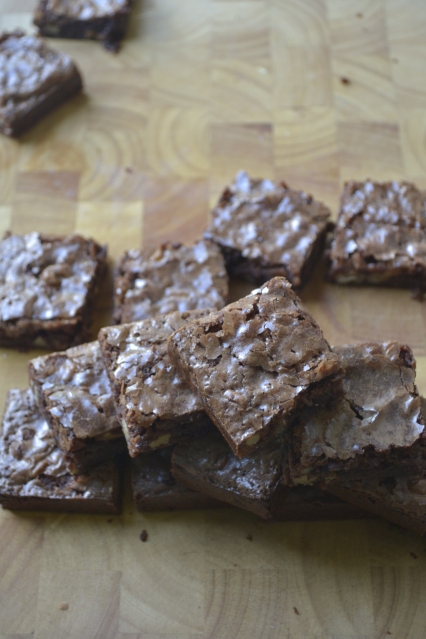 I had to take dessert to a braai this evening and between myself and another tutor the options were cheesecake or brownies. She chose the cheesecake so I made these. (I was going to take the Tea with Bea ones but decided against it. They’re best when frozen and therefore too complicated to serve when you have no control. Also, the Princess is slowly making her way through them so I figured no loss making others.) I was surprised by the lack of chocolate and other general ingredients in the recipe. But it makes 16 portions when cooked in a square cake tin and the brownies are dense and chewy, filled to bursting with walnuts. It’s a one pot mixing affair which I love! I converted the measurements from their American designation. I also used golden caster sugar (because it is my default and I don’t particularly understand the notion of ‘sugar’ as it seems every recipe I read these days is very specific). I also used 70% dark chocolate and not the unsweetened variety called for here. I don’t think I’ve ever seen unsweetened chocolate for sale anywhere. I shall look when I’m in Chicago in three (!!!!) weeks.

Adapted from The Secret Lives of Baked Goods

Preheat the oven to 160C and line a square 21cm tin with baking paper. Melt the butter and sugar together in a saucepan on a low heat, stirring to prevent the chocolate from burning.

Once the mixture is smooth, remove the pan from the heat and stir in the sugar. The mixture will look like it’s split but do not despair.

Whisk in the eggs and vanilla, then fold in the flour and salt. Lastly fold in the walnuts. Pour the mixture into the baking tin and bake for 35 minutes, until the brownies are risen and shiny and a skewer inserted comes out mostly clean.

Cool in the tin on a wire rack completely before slicing.