One of the things I decided I had to do whilst in Chicago was to go on a food walking tour. You may recall I did two last year, one in Paris and one in New York. I like food tours for many reasons but the main one is that food tours generally show you places you might over look. They often go to big name places too, but it’s the quirky, off-the-beaten-track ones that are worth the tour. I also like food tours because they tend to be relaxed and friendly, and people on them are always interesting. (Yet another research project: who goes on food tours? Why? What’s included in the tour? How is the tour arranged? Etc etc etc).

This tour was run by Chicago Food Planet who run two other tours in the city. Our guide, Colleen, was enthusiastic and knowledgeable, and walked us around the neighbourhoods with local insight and energy. This is a classic sort of Chicago tour, it starts with deep pan pizza and ends with pierogies, taking in some fabulous and historical buildings (if you can call the original Playboy mansion historical) whilst talking about the history of Chicago (it seems everywhere you go in the city, someone will mention the fire…)

The tour started at Lou Manalti’s, home of deep pan pizza. Apparently the first deep pan pizza was made in Chicago in 1943 at Pizzeria Uno but the Malnati one is the best.

They use butter in their pizza dough which makes it crispy and rich. We ate their signature salad to start (romaine lettuce, tomatoes, olives, Gorgonzola with a sweet onion vinaigrette) followed by their Chicago Classic pizza with sausage. The pizza is layered with mozzarella at the base, then sausages, then tomatoes (chosen and canned in California), followed by Parmesan. It was spicy and sweet and filling. It’s a little bit like pie – much more than pizza as I know it but I’m easily converted. If I had to eat this forever, I’d be okay. 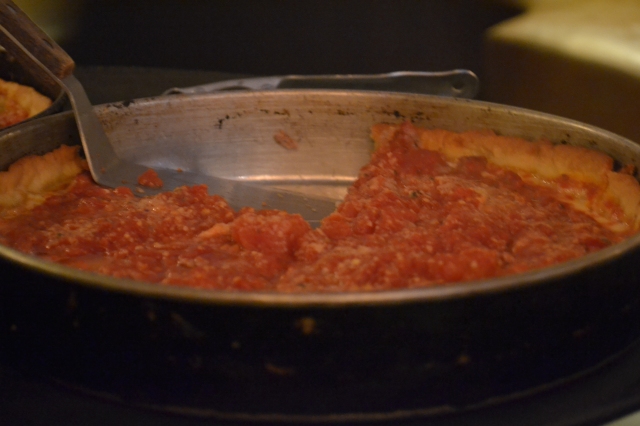 From pizza we moseyed over to Teagschwendner, a German tea company. We had the opportunity to smell a variety of their teas and then they made us the Cranberry and Mango one, iced. It was incredibly fragrant, floral with fruity notes. We learnt about caffeine content and how to brew iced tea. It turns out, I like my iced tea unsweetened. Who knew?

We then walked through Gold Coast, past the old Playboy mansion, and over to Old Town.

Old Town feels quite suburban, the buildings are lower and there are many people out and about, walking dogs, sitting at cafes, generally being. The whole place has a chilled out vibe. We stopped off first to sample sushi –  a place that’s been around since 1967 and is still family run, Kamehachi. I sampled the spicy tuna delux maki, which was excellent. Then we crossed the street to The Fudge Pot and ate home-made butter toffee. If I could’ve I would have bought baskets of the stuff, but sadly, in the heat, it was destined to melt back into a pool of syrupy chocolate/toffee mess so I restrained myself. I had a number of samples whilst in the shop though.

Then we went a little back down the street to Old Town Oil, a place of true awesomeness. They stock a variety of olive oils and balsamics (from Modena), of varying flavour and age. We sampled a variety, but my favourite by far was the white peach balsamic and the California ‘mission’ olive oil, with a peppery finish. I had to go back later and buy bottles of both and I’ve been using the balsamic with all the peaches I’ve been baking lately. It’s just amazing.

We then went right next door to The Spice House, where we got to sample a variety of spices (not quite as strange as it sounds, I promise). The Spice House has clever names for their combinations, like Lakeshore Drive, Back of the Yards Garlic Pepper, and Hyde Park seasoning, often named after specific neighbourhoods.

I also really like their window display, with all it’s fresh herbs.

From there we walked to our final stop, via some classic Chicago houses (some I wouldn’t mind living in either).

Our last stop was Delightful Pastries where we ate pierogies filled with potato and cheese, followed by some macaroons. Delightful Pastries makes European baked goods to serve one of the largest Polish populations outside of Warsaw, so pierogies happen to be one of their specialities. They were warm, slightly oily, smooth and salty. I was instantly hooked.

The tour was a great way to spend three or so hours wandering the neighbourhoods of Chicago. Colleen was fun and informative, the places we visited were all family owned (and they all smelt amazing when we walked in), and most of all, it took me to a part of the city I might have overlooked on my short visit.